In the long debate over the InterCounty Connector (ICC), the project’s expected time-savings were often challenged by project opponents.  Turns out, as with most of their claims, the opponents were dead wrong.

A new study confirms travel time savings in this corridor as a result of the ICC that are right in line with the projections published in the Environmental Impact Statement documents and often cited by Maryland transportation officials and advocates in support of its construction.  How big are the time savings, now that the road is open?  Here is one of the tables from the report. See for yourself. 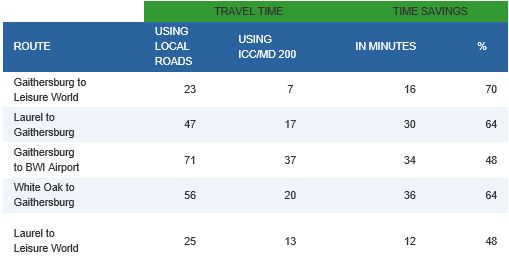 Earlier studies released in 2013 noted significant numbers of trips were diverted off local roads once the ICC opened, and travel times and congestion levels on those surrounding roads had also dropped considerably; and overall usage of the ICC increased 40% in 2012 to over 30,000 trips a day, and has been steadily increasing every month since then, often by more than 2% per month. Weekday trips on the ICC are now comfortably meeting the projections for this facility, and it is having the desired impact on reducing congestion levels and improving travel times throughout the whole area.

Transportation funding remains a key issue in Maryland this year. Tell your legislators to Invest Now!